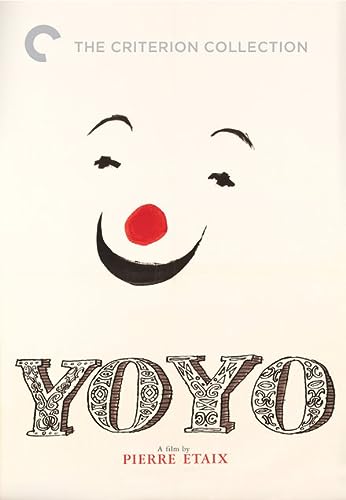 Movie: Yoyo(August 1965 (UK))[tt0059934] A man has everything: dozens of servants, a palace, vast woods, gardens, a lake, mechanical toys, private entertainment troupes of musicians and dancers. He has it all - but love. When alone, he sits at a desk, sighing, and looking at a photograph of a pretty girl. One day, the circus descended onto his palace, and amidst all the fun it brought, he recognized the Amazon on the white horse - the girl in the photograph. The girl is now the mother of a small boy, Yo-Yo, whom she considers that looks like the millionaire, even under a clown's make-up. The boy will spend some time in the palace, in awe of so much riches, but he will leave (in a dream-like scene) on the tusks of the elephant. Time passes - and one day Yo-Yo will be the owner of his father's palace in decay. Starting from scratch, he will rebuilt it, and be praised as a great clown, an artist, a film-maker, a millionaire. Yet, something is amiss... Written byArtemis-9

alan-51-111974 on 22 March 2013
I'm 47. It's genius. I have no other words, to say them would be a disservice.OK my review didn't pass the quantity test: I have to write more lines otherwise I can't submit this.Tarkovsky's "Ivan's Childhood" has burnt indelible images into my mind, so did this film.This film also bought me joy. It's very beautiful, very very funny and at times very sad.It's highly stylised throughout, each period of the story is depicted through the cinema conventions of that period (somewhat). The stylisation continues through highly over-exaggerated but incredibly musical sound design and almost no dialogue.The cinematography is stunning, the direction and editing are stunning, the performances are excellent throughout.I may be alone in thinking that this is one of the greatest films but please make your own judgement, I'm happy.

The Adventures of Mark Twain