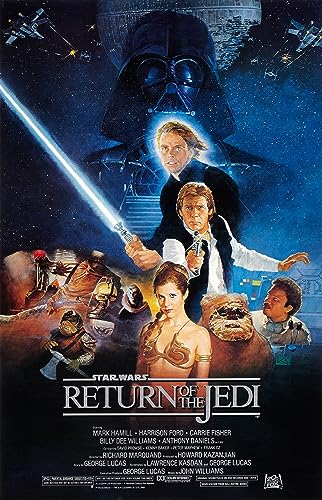 Movie: Star Wars: Episode VI - Return of the Jedi(1983)[tt0086190] Luke Skywalker battles Jabba the Hutt and Darth Vader to save his comrades in the Rebel Alliance and triumph over the Galactic Empire. Han Solo and Princess Leia reaffirm their love, and team with Chewbacca, Lando Calrissian, the Ewoks, and droids C-3PO and R2-D2 to aid in the disruption of the Dark Side, and the defeat of the evil emperor. Written byJwelch5742

ladysolo on 11 May 1999
I'm sick of people whining about Ewoks! True, they're not the best thing that ever happened to Star Wars, but they DID happen, so deal with it! Besides, they ARE cute, and I don't care if they're marketable. Yubb Nubb!This movie always leaves me in tears. It's perfect. The end could not be better. I'm excited for The Phantom Menace because it will suddenly throw the focus of the whole story from Luke to Anakin. I love how he is revealed at the end - it would be too unresolved any other way. So those of you who are complaining that Vader's helmet was removed, take a moment to think about it. It's very effective. Vader, the man who hid behind a mask for 20 years, is finally revealed as a sick-looking man. He is not entirely machine - he's vulnerable.I don't know how the casting director happened to pick such good actors in A New Hope. They all do so well. They are believable characters. Hamill does an excellent job with his dramatic character development. Fisher does a fine job being a female role model (I mean, come on! She killed Jabba even when so many others had failed!). Harrison Ford - need I say more?The music is once again brilliant. It's so very touching and significant when you can pick out character themes at different parts of the movie. The best climax is when Luke shouts "NOOO!" and jumps out to fight his father in the Final Battle. John Williams is nothing short of a genius! What an amazing man!Already, the movie has so much more meaning for me because of Episode I. I can't wait to finally see it in the theatres (CAN I WAIT???) and then watch the original trilogy yet again.Bravo!

Raiders of the Lost Ark

Indiana Jones and the Last Cru

The Lord of the Rings: The Two