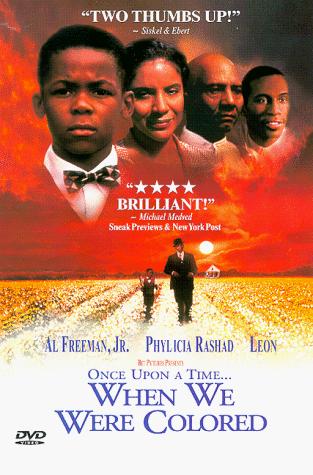 Movie: Once Upon a Time... When We Were Colored(1996)[tt0114039] This film relates the story of a tightly connected Afro-American community informally called Colored Town where the inhabitants live and depend on each other in a world where racist oppression is everywhere, as told by a boy called Cliff who spent his childhood there. Despite this, we see the life of the community in all its joys and sorrows, of those that live there while others decide to leave for a better life north. For those remaining, things come to a serious situation when one prominent businessman is being muscled out by a white competitor using racist intimidation. In response, the community must make the decision of whether to submit meekly like they always have, or finally fight for their rights. Written byKenneth Chisholm <kchishol@execulink.com>

wordsmith_57 on 29 March 2009
I kept waiting for the bad moments to happen, as so often they do in these reminiscent movies of growing up in the south, yet no real drama occurred. These were moments pieced together, and if that was the intent--it worked. True, a child's reflection of childhood would be pieces of memory chained loosely together, impressions of events, people, and times. However, when the movie ended I thought, "That's it?" There were fine performances; however, the plot seemed to soft-step around the real issues, such as the Jim Crow laws, segregated schooling, subservient wages, and escaping to the north to avoid the subjugation. We got breadth, when depth might have made a much more interesting plot line.

It Came from the Sky

Book of Love: The Definitive R