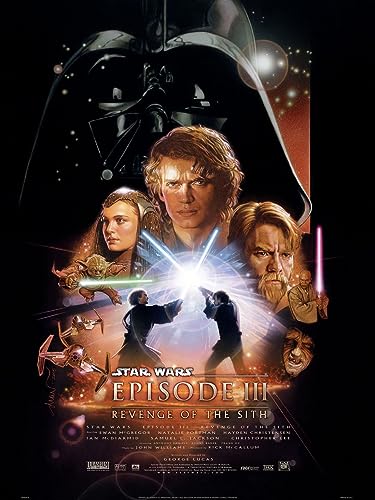 Movie: Star Wars: Episode III - Revenge of the Sith(2005)[tt0121766] Nearly three years have passed since the beginning of the Clone Wars. The Republic, with the help of the Jedi, take on Count Dooku and the Separatists. With a new threat rising, the Jedi Council sends Obi-Wan Kenobi and Anakin Skywalker to aid the captured Chancellor. Anakin feels he is ready to be promoted to Jedi Master. Obi-Wan is hunting down the Separatist General, Grievous. When Anakin has future visions of pain and suffering coming Padmé's way, he sees Master Yoda for counsel. When Darth Sidious executes Order 66, it destroys most of all the Jedi have built. Experience the birth of Darth Vader. Feel the betrayal that leads to hatred between two brothers. And witness the power of hope.

cpricciardi on 4 May 2005
(No Spoilers!) Excitedly submitting my comments two weeks prior to the opening of the film (after a preview screening at the Ziegfeld Theater), I am thrilled to add to what appears to be a growing wave of positive reaction to Lucas's effort in Episode III. As a life-long fan deeply caught in a love hate relationship with Episodes I and II, I cautiously awaited this final installment. I felt in my heart that this would be a great film, but feared that somehow I would again be disappointed. Maybe I was starting to succumb to the notion that I no longer had the spirit of that six year old boy who was mesmerized by the original Star Wars, long ago in 1977 at that far away NJ theater. Maybe.From the opening 20th Century Fox logo, the movie hits the ground running, proving once again the CGI capabilities of ILM and the thrills they inspire. However, unlike the first two films, where spectacular effects were layered upon complicated, contrived and sometimes dramatically vacant scenes executed with some of the worst performances in memory, there is solid story telling here. And that's the difference.The drama builds steadily in the first act before hitting light speed with a combination of excitement, dread, intrigue and pain. This strong dramatic spark ignites the entire cast, helping them turn in what are easily their best performances of the three films. When you have a script with this kind of thump and talented actors, the result is fun to watch. And for once, perhaps most importantly, the special effects serve the script, not the other way around.Anakin's internal struggle, present from frame one, quickly consumes him, catapulting the film towards its inevitable conclusion. While its no surprise that the film ends on a desperate note, there does remain a glimmer of possibility as the story segues into the aptly titled classic "Star Wars Episode IV: A New Hope". It's thought provoking and inspiring.It's also worth noting that as advertised the film is dark, makes no apologies, and is much less child friendly then the others. All pluses in my opinion.The final result with "Revenge" is a complete film that I will never forget, a somewhat renewed perspective on what Lucas was going for with Episodes I and II, and assurances that that little boy inside me is still there, popcorn in hand, ready for a good movie.