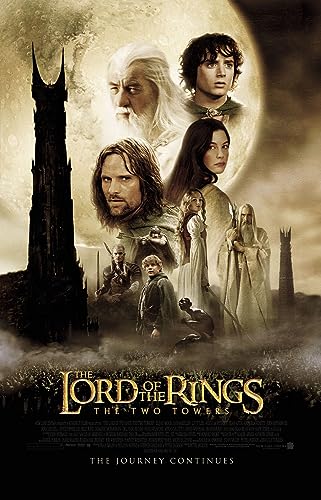 Movie: The Lord of the Rings: The Two Towers(2002)[tt0167261] The continuing quest of Frodo and the Fellowship to destroy the One Ring. Frodo and Sam discover they are being followed by the mysterious Gollum. Aragorn, the Elf archer Legolas, and Gimli the Dwarf encounter the besieged Rohan kingdom, whose once great King Theoden has fallen under Saruman's deadly spell. Written byJwelch5742

Barky44 on 5 August 2004
Long before it came out, I knew The Two Towers would be the toughest of the three Lord of the Rings books to put on film. Not only is it the middle child, but the very structure of the book makes it hard to craft a linear story with all the plot lines in tact and interesting.But I think Peter Jackson and company did a very good job. It's not as strong as Fellowship, but is still outstanding.All the elements of the LOTR films are here: the beautiful photography, set designs, costumes, scenery, special effects. All amazing, all brilliant, all Oscar-worthy.The performances are terrific, too. Bernard Hill, Viggo Mortensen, Elijah Wood, Miranda Otto, all did great jobs. The supporting actors, too.It is sad that Ian McKellan's role is relegated to almost cameo status, but that's the nature of the book. The biggest shame is Christopher Lee. He has so little screen time in this film, I think he only says two or three lines on camera, the rest is "brooding". Such a waste, he is one of the great actors of our time, a real joy to watch (and a scene stealer to boot).But the stars of the piece have to be Gollum and Treebeard and the Uruk army. The sequence with the Ents seeing the destruction Saruman wrought upon the trees brought tears to my eyes, and their revenge brought cheers to my voice. The battle of Helm's Deep was probably too long, but impressive nonetheless (and will probably be the model for "epic battle sequences" for years to come). And Gollum. What can be said about Gollum that hasn't already been said. We have entered into a new age of CGI, and, like all great works of art, it has a human soul.A great film. 9 out of 10, the only items keeping it from getting a 10 are the short-shrifting of Christopher Lee and that some parts don't quite flow too well (a problem rooted in JRR Tolkien's novel, not the fault of the filmmakers).

The Lord of the Rings: The Ret

The Lord of the Rings: The Fel