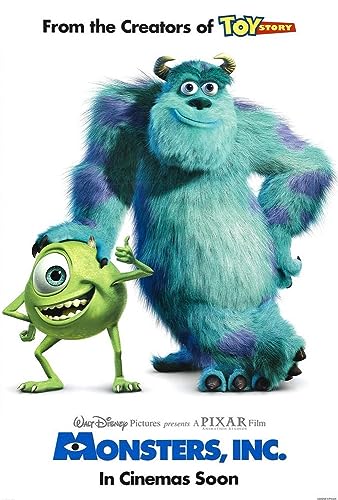 Movie: Monsters, Inc.(2002)[tt0198781] A city of monsters with no humans called Monstropolis centers around the city's power company, Monsters, Inc. The lovable, confident, tough, furry blue behemoth-like giant monster named James P. Sullivan (better known as Sulley) and his wisecracking best friend, short, green cyclops monster Mike Wazowski, discover what happens when the real world interacts with theirs in the form of a 2-year-old baby girl dubbed "Boo," who accidentally sneaks into the monster world with Sulley one night. And now it's up to Sulley and Mike to send Boo back in her door before anybody finds out, especially two evil villains such as Sulley's main rival as a scarer, chameleon-like Randall (a monster that Boo is very afraid of), who possesses the ability to change the color of his skin, and Mike and Sulley's boss Mr. Waternoose, the chairman and chief executive officer of Monsters, Inc. Written byAnthony Pereyra {hypersonic91@yahoo.com}

george.schmidt on 5 November 2001
MONSTERS, INC. (2001) **** (Voices of: Billy Crystal, John Goodman, James Coburn, Jennifer Tilly, Steve Buscemi, Mary Gibbs, Bonnie Hunt, Bob Peterson, John Ratzenberger, Frank Oz, Steve Susskind, Jeff Pidgeon, Sam "Penguin" Black, Daniel R. Gerson. (Dir: Peter Docter/Co-directors: David Silverman, Lee Unkrich)There's something undeniably magical about a Disney movie that brings out your inner child and the streak continues to manifest itself in the latest with its fine track record with upstarts Pixar (the "Toy Story " films) in delighting children of all ages in one of the year's funniest (and most fun) films.The childhood phenomena of imagining monsters lurking in one's bedroom closet or under the bed is in actuality a reality that exists solely for the world of the monsters to use all the energy extracted from a child's screams as their natural resource to power their communities and subsist in their parallel universe. Specifically Scream Heat ("We Scare Because We Care"), the corporate entity that harnesses the youngsters' reactions to its hard-working crew of creatures including our heroes James P. "Sulley" Sullivan (marvelously voiced by Goodman) and his best buddy Mike Wazowski (ditto Crystal). Sulley is a bear-like, blue and purple hairy and horned monster and Mike is a cyclopean lime green M&M clone. The two couldn't be more different yet both share their passion for their vocation and the only thing getting in their way is their rival colleague Randall Boggs (Buscemi, at his oiliest menacing), a reptilian nasty who wants to beat Sulley for the all-time factory record of most points racked up in a single day on the job … at any cost. Watching the proceedings is Sulley's father-figure boss Henry J. Waternoose (Coburn) – a cross between a crab and Edward G. Robinson – whose main priority is avoiding any "rolling blackouts" (in one of the film's subtle jabs at the current climate in our nation). Mike is in love with cutie pie receptionist Celia (Tilly) who also sports one eye and is afoot taller than him, with a hairdo sporting a Medusa twist (snakes sit atop her head) who wants something from him besides excuses to their frequently put-upon dates together. One day after work Sulley accidentally lets into their world a tiny 4 year old girl – a big no-no – legend has it that one touch is toxic and fatal! – which causes mass havoc wreaked upon the populace as the authorities attempt to corral the tyke while decontaminating the infected workshop's workers (a running gag has the SWAT like DEA agents popping in at a moment's notice whenever a sign of human contact – i.e. a small cotton white sock attached to an unsuspecting monster – makes its ugly presence known!) Mike is in a panicky sweat that they will lose their jobs and tells Sulley he can't hide Boo (the nickname the big guy dubs the adorable tot) and they must return her to her bedroom. Easier said than done when Randall gets wind of the partners abetting the unsuspecting crime and he too has his plans to use Boo for his own selfish endeavors…at any cost! The film is a laugh a minute romp and an incredible mix of state-of-the-art computer generated dynamics that truly enhance the candy-colored world of Mike & Sulley with its picture perfect depictions of moveable hair (see how Sulley's locks sway to and fro so naturally! A first for CGI imagery!) and expressiveness given to the one-eyed Mike who works his brow into a real sweat. Never before has voice talent been so perfectly matched and acted to a t than in the comic team of Crystal and Goodman with their characteristics smartly enhanced into their characters with Crystal's liberal use of his "SNL" Willy the Masochist ("Oh I hate when that happens!") and Goodman's burly, awshucks demeanor fits his soft-hearted meanie like a golden glove. Sulley is the true star of the show with his emotional overload not unlike a kid learning to make a new life transition as he discovers there's more to his existence than meets the eye (same for Mike; pun intended). When he realizes that Boo (by the way, nice job by the producers to use real-life 4 year old Gibbs, in easily the cutest turn by a child performer ever without making an audience gag) is not threatened by his hulking presence. The laughs are largely thanks to Crystal's myopic M&M who is always one-step behind his behemoth buddy and slow on the uptake as the plot proceeds with his sly one-liners, sudden bursts of unrestrained anger and confusion, and slapstick antics leads the film into uncharted territories of hysterical laughter and a great breakneck roller-coaster ride with Mike & Sulley attempting to find Boo's bedroom door with Randall in hot pursuit gives the film a giddy headrush of adrenaline. The film is witty, bright, upbeat and has its shares of incisiveness (I loved the use of HarryHausen's as a local chic eatery that all the monsters are dying to get into; in case of those who don't know Harryhausen, Ray Harryhausen, is the premier stop-motion animator pioneer who gave life to scores of sci-fi creatures including the fabled "Sinbad" flicks of the 1960s and 1970s among others) that will undoubtedly have its constituents clamoring for a sequel pronto. Arguably one of the best films and funniest of the year; I loved it and so will you (and your kids if you have any; if not all the more to see it again) An instant classic.