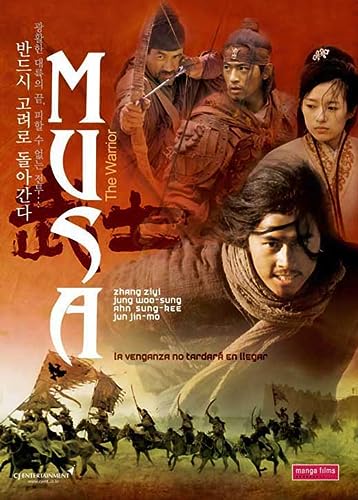 Movie: The Warrior(2001)[tt0275083] In 1375, China was in chaos between Yuan Dynasty and Ming Dynasty. Coryo (an ancient kingdom of Korea then) sent a delegation of many diplomats, soldiers and a silent slave to make peace with the new Chinese government. However, this delegation got charged as spies and sent in exile to a remote desert. On the way the group came across a Yuan troop, and the Coryo soldiers managed to survive the battle. They began the journey toward the faraway home country, where they met the Yuan troop again. When they found out the Yuan troop kidnapped a Ming princess, they decided to rescue her so that they could get a ship to go home. Then the battle began... Written byStevie Cho <stevie@unitel.co.kr>

FilmFlaneur on 26 May 2003
Those who settle down to enjoy the excellent 150-odd minute Musa will be surprised at how much it suggests a Western. There's sweeping landcapes, a cross-desert ordeal; competition between villains and heros, 'stagecoach' chases, abandoned and defended forts, and 'cavalry' charges. These, as well as a strong sense of a man-having-to-do what-a-Man-has-to-do, combine to create familiarity to those who know such films as (for instance) The Alamo and Commanche Station. That's not to say that Musa has no originality, or is not strongly rooted within Korean national cinema. It contains a number of striking set pieces - notably the several pitched battle scenes, multiple characterisation, as well as some insight into the various power struggles which make up mid-fourteenth century Asian history. But at the heart of this package remain a well-tried fairy story, that of a cold Princess who must learn to swallow her pride, and of a brave servant's unrequited love. Sung-Su Kim, who directs from his own screen play, does a very good job in drawing together his disparate group of travelling companions on a dangerous journey: a Princess, a General, a monk, soldiers, wives, a cowardly translator, a whore, etc. To provide suitable contrast between the moments of combat, he relates them in short, effective, dialogue scenes. Its good to see a film too in which the ubiquitous wire work and over the top gymnastics, beloved by some Eastern action directors, is conspicuous by its absence. Its also one where the director relies less on extreme camera angles and special effects to create visual drama than on the regular ebb and flow of dramatic editing. Perhaps because of this 'naturalness', the battle scenes are consistently exciting and involving. They are also staged in enough different locales to make them varied viewing each time. A standout is a desperate confrontation amongst trees, where the director takes full advantage of foliage cover, confusion, and events within the frame to create some real martial suspense.The HK disc I saw was generally excellent, with occasional errors in subtitle grammar, as well as the odd compression problem (on-screen blur), usually during horizontal tracking movements. All told, though, the cheap price of this disk makes it an excellent buy and I strongly recommend it - and the film.