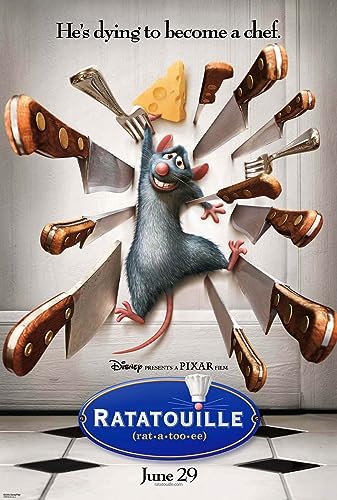 Movie: Ratatouille(2007)[tt0382932] A rat named Remy dreams of becoming a great French chef despite his family's wishes and the obvious problem of being a rat in a decidedly rodent-phobic profession. When fate places Remy in the sewers of Paris, he finds himself ideally situated beneath a restaurant made famous by his culinary hero, Auguste Gusteau. Despite the apparent dangers of being an unlikely, and certainly unwanted, visitor in the kitchen of a fine French restaurant, Remy's passion for cooking soon sets into motion a hilarious and exciting rat race that turns the culinary world of Paris upside down. Written byOrange

superfan18 on 11 June 2007
Tonight I went to see Ratatouille during a preview offered to Myspace users in Boston. Overall the movie was GREAT! It was really funny, often in unexpected places, the storyline kept you engaged the entire time and the overall mood was lighthearted and inspiring. A real "feel-good" movie. I admit I was a bit skeptical going in, I mean the idea of a rat in a kitchen kind of left me queasy, but I left the theater excited to see it again when it is released. The voice actors are excellent and the animation is amazing. I've been to Paris before and the overall views were very accurate. At times I could tell exactly where in the city the events were taking place. Overall a fabulous movie, I highly recommend it!