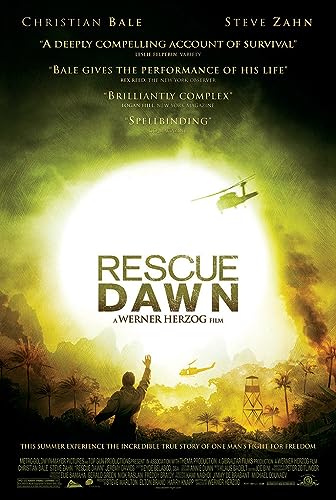 Movie: Rescue Dawn(2007)[tt0462504] In 1965, while bombing Laos in a classified mission, the propeller plane of the German-American US Navy pilot Dieter Dengler is hit and crashes in the jungle. Dieter is arrested by the peasants, tortured by the Vietcong and sent to a prisoner camp, where he meets five other mentally deranged prisoners and guards. He becomes close to Duane and organizes an escape plan; however, the unstable Gene opposes to Dieter's plan. When they discover that there is no more food due to the constant American bombings in the area and their guards intend to kill them, Dieter sets his plan in motion. However, an unexpected betrayal splits the group and Dieter and Duane find that the jungle is their actual prison. Written byPHD, in CT USA

Jonny_Numb on 23 August 2007
Writer-director Werner Herzog, whose films have always been marked by a rapport with the natural world, takes this trademark to Laos in "Rescue Dawn," a compelling, intimate account of the Vietnam conflict. Based on the real-life tale of Dieter Dengler (Christian Bale), a German-born/American-bred fighter pilot with a cocky, cowboy-like demeanor, the film goes for realism and largely succeeds. The setting is a microscopic POW camp where Dengler and a half-dozen prisoners, including Dwight (Steve Zahn, playing well against type) and Gene (Jeremy Davies--"Saving Private Ryan") plot an escape. Interestingly, the extensive Vietnamese spoken in the film is not subtitled, which actually adds to the strong sense of isolation incurred from the POWs' position. Herzog also paints "Rescue Dawn" as a timely meditation on the Iraq War--while Dieter's John Wayne persona (that takes a drastically different turn in the second half) could be read as an endorsement of American militarism, we see the emaciated, defeated prisoners almost as symbols of a war that's been "lost" from the beginning; even later in the film, the Vietnamese captors begin to show the same signs of fatigue and desperation. The whole concept of "escape" is essential to making an entertaining, suspenseful film (which "Rescue Dawn" certainly is), but also reflective of a current foreign-policy mess that should have been curtailed before it even began. But Herzog is subtle in his politics, and lets the jungle do most of the talking--once Dieter and his fellow prisoners escape, the road to a "happy ending" is anything but "cut and dry." The director often puts us in the midst of torture and terror, but also milks moments of surprising humor to great effect, and gets excellent performances from the entire cast (while Bale is top-billed, Zahn and Davies are the real standouts). My only real complaint about the film is a conclusion that comes off as contrived and unnecessary, stretching the credibility of the harrowing realism that came before. Otherwise, "Rescue Dawn" is one of 2007's standout features.