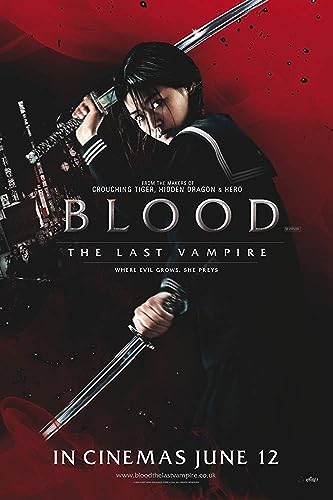 Movie: Blood: The Last Vampire(2009)[tt0806027] In 1970, the four hundred year-old skilled samurai Saya is sent to the Kanto High School in an American military base in Tokyo by the Council, a secret society that has been hunting vampires for centuries. Saya has the appearance of a teenager but is the tormented half-breed creature with the soul of her human father and the powers and need of blood of her vampire mother. She is obsessed to face the powerful demon Onigen that killed her father. In the base, Saya saves Alice McKee, who is the daughter of General McKee and commander of the base, from the attack of several vampires. When General McKee is killed by a member of the Council, Alice runs to the hotel where Saya is lodged. They join forces and go to the countryside to chase Onigen. Written byClaudio Carvalho, Rio de Janeiro, Brazil

darkmax on 7 June 2009
I've not read the manga, so I cannot comment on the accuracy of the movie to it. However, the movie when compared to the original full-length anime, it has been kept as true as it can be done.However, due to personal preferences, I did not like the anime. the story was thin and the characters very 2D. No depth, no emotions, pure blood and gore. Just the way the Americans liked it, and what the whole hype was about.The movie, unfortunately picked all these up and added a bit more. But it was not enough to give it anymore depth. The yellow tint is overused in almost all the anime-to-movie adaptations. The actors are fine, but for all their skills and talents, could not bring make a 2D storyline more depth and excitement.Shame. I was expecting a better than average manga adaptation. there is so much potential left totally unexplored.Therefore I say, it is true to the anime.

Snow Flower and the Secret Fan