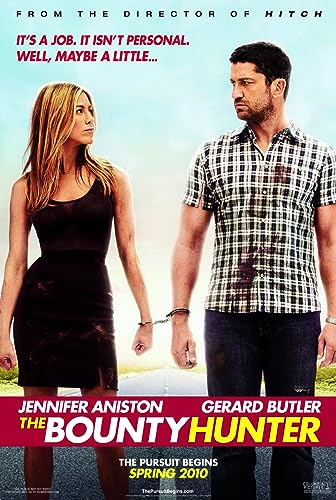 Movie: The Bounty Hunter(2010)[tt1038919] Milo Boyd, a down-on-his-luck bounty hunter, gets his dream job when he is assigned to track down his bail-jumping ex-wife, reporter Nicole Hurly. He thinks all that's ahead is an easy payday, but when Nicole gives him the slip so she can chase a lead on a murder cover-up, Milo realizes that nothing ever goes simply with him and Nicole. The exes continually one-up each other - until they find themselves on the run for their lives. They thought their promise to love, honor and obey was tough - staying alive is going to be a whole lot tougher. Written bySony Pictures

StarDragyn on 19 March 2010
Just got back from the theater--walked in the door and turned on the computer--and am in agony! I was really excited about this movie and looking forward to seeing it ever since the previews came out. But, boy!, was I disappointed. All of the cute stuff (and pretty much the only cute stuff) was contained in those previews.There is nothing original, and nothing funny enough or well-acted enough to make its unoriginality interesting. Jennifer Aniston did a decent job, given what she had to work with (though she does act like she does in most of her other movies). But the writing wasn't good, and the plot was weak and all over the place. Most everything you see, you've seen before--just done better somewhere else--and all of it combined into something very hodgepodge. It's like the storywriters just took a "pinch of this" and a "dash of that" from various comedies, romances, and action adventures, and tried to make a soup out of them.The music was so bad I'm even giving it its own paragraph. I had no idea the music would make such a difference, normally I don't notice it's even there. Not so on this one! It was often agonizingly out of place, where you had to wonder what the score writers were thinking, or why they picked the song they did.I left twice for the concession stand, and didn't even care to ask what had happened while I was gone. There were times I found that I was even having to remind myself to pay attention to the dialogue. As I don't go to the theater often, it's usually a treat to me, and most of the time I enjoy whatever I'm watching simply because it's relaxing and a chance to be out. But for once I was actually bored. It was about the quality of a TV show, but unfortunately lasted the length of a full movie.The romantic/action with husband and wife fighting-yet-finding-they-might-still-love-each-other plot has been done before much better. "Mr and Mrs Smith" was GOOD. "Fool's Gold" was decent. "Bounty Hunter" was just downright poor. So disappointing!

Just Go with It

He's Just Not That Into You

Life as We Know It

What Happens in Vegas