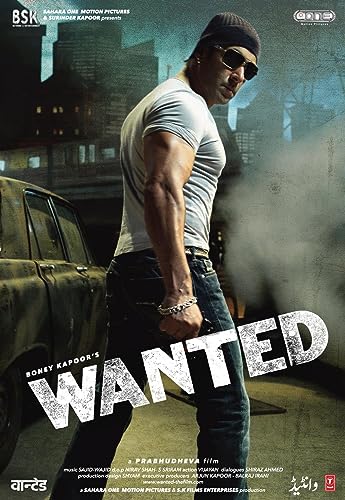 Movie: Wanted(2009)[tt1084972] Mumbai-based middle-classed Jhanvi, who lives with her widowed mother and younger brother, has three suitors. The first is much older and considerably overweight - Sonu Gates. The second is Police Inspector Talpade, who is already married to Nandini, but lusts after Jhanvi so much so that he creates circumstances that will force her to marry him. The third is a male named Radhey - who often comes to her rescue - but breaks her heart when she finds out who is really is - a cold-blooded killer who works for a gangster named Ghanibhai. The later is a ruthless gangster who challenges Police Commissioner Ashraf Taufeeq Khan with impunity, and even abducts his daughter to ensure his personal safety. Written byrAjOo (gunwanti@hotmail.com)

KIng-SIngH on 20 September 2009
Honestly, when I saw the promos I had no expectations at all. But after watching Wanted, all I can say that it is a real nice movie. It takes you back to the glorious 80s, where our hero used to beat up dozens of gundas all alone, save his girlfriend from gundas, over the top mannerisms, etc. It is a perfect example of a old wine in a new bottle. The truth is that our Bollywood had lost its innocence, trying too hard to imitate the west, making so called art/serious movies aka parallel cinema. Masala movies were almost finished. But I hope this has revived them again, because the movie was very much enjoyable.Action scenes are OTT at times, but still enjoyable.It has some nice performances, but it is Sallu bhai that carries the movie on his shoulders. No other actor in Bollywood could have pulled the role with such an ease. Because of him you just overlook at the flaws.Ayesha Takia looks stunning and her chemistry with Sallu does work! Vinod is not given enough footage but manages to do well.Mahesh Manjrekar is brilliant. He was just too good at times. Typical corrupt lusty police officers. Scene where he is on his laptop or any other scene... Really good.Prakash Raj deserves special mention. He was just amazing as the DON. Amazing in the jail scenes!The twist in the movie was quite nice and not really expected. (as I haven't seen the original) There are some really funny scenes in first half as well =DThe movie has almost no story, but the screenplay was nice.The only thing that was quite annoying was the amount of unnecessary songs. It got boring, because It was like fight scene - song - fight scene - song... Just like those 80s movies, but quite exaggerated. I wish there were bit less songs.Best scenes: