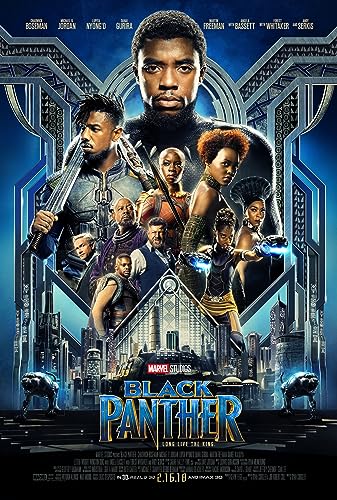 Movie: Black Panther(2018)[tt1825683] After the events of Captain America: Civil War, Prince T'Challa returns home to the reclusive, technologically advanced African nation of Wakanda to serve as his country's new king. However, T'Challa soon finds that he is challenged for the throne from factions within his own country. When two foes conspire to destroy Wakanda, the hero known as Black Panther must team up with C.I.A. agent Everett K. Ross and members of the Dora Milaje, Wakandan special forces, to prevent Wakanda from being dragged into a world war. Written byEditor

NpMoviez on 26 July 2018
Well, here's a movie that's hated by a number of people as a result of it being overhyped. It was fairly entertaining and decent. Just that it wasn't worth all the hype. The only thing it has to be a unique MCU film would be that it had was the majority of people from black community as its cast members. I am not criticizing that, but that's NOT a legit reason to hype it up so much.Good. It was whatever the first Thor movie couldn't be. In other words, it was "Thor" (2011) on Wakanda and better. It has some fantasy elements regarding the "Black Panther formula" and at the same time, it is quite of a sci fi too, and on the sideline it's also a crime film. These themes hold together very cohesively and make the movie a solid piece of art, on the whole. For the first time in an MCU movie, a villain was good. Killmonger is probably my second favorite MCU villain till date, the first one being Thanos. That character was well written to say the least. We knew where he was coming from, his motives, what he is up to and why. He is the best part of this movie. Many of the heist and crime film vibes it had was very interesting in the scenario they set up for this movie. The character interactions and the dynamic between various characters were good. Some funny scenes and dialogues land properly (while some don't, it's an MCU movie, after all). While watching this film, you won't want to skip any part of it, even though, in the end, you might be saying, "is that it?! Dafuq?!!" But most importantly, it gives you a really good introduction to Black Panther. We can get behind this hero for good. The character arc they give to him is excellent.Mixed. A lot of it feels like parts of Nolan's Dark Knight Trilogy. The "sci fi" part feels quite like the stuff going on between Batman and Fox. The establishment of the character of Killmonger was (in an undertone) similar to how we got introduced to The Joker in "The Dark Knight" or to Bane in "The Dark Knight Rises". Also, some scenes are quite similar to interrogation scenes of "The Dark Knight". I am not saying that it was a ripoff of Nolan's films. It might be the same in the source material they adapted, I don't know. But noticing those themes being dealt in a similar way, makes it kind of a mixed bag. The movie, also, apparently "kills" off a character, which doesn't feel so compelling because they were to be back in future films (which had already been announced or were seen in the trailer of Infinity War). Not saying that the way they killed off the character was bad. If we didn't know about him being back in Infinity War, it would've made a solid impact. But, we know about him being back. So, it wasn't much interesting.Bad. Many fights and scenes in the film are super clichéd. Not only that you can predict what will happen, you can even predict what kind of a dialogue will close that scene, and what will be the immediate consequence for the character who gave that piece of dialogue. The third act of the movie was just plain generic third act of a superhero movie with a lot of clichés and dumbed down "Captain America: Civil War" conditions with some of kind of "Lord of the Rings" vibe.Conclusion. "Black Panther", for me, was some kind of a mixed bag. It was surely overhyped, but wasn't so bad of an overhyped movie. On the whole, a solid entertainer. Not something like Infinity War or Iron Man or Avengers or Civil War that will be talked for a long time.Rating. Score : 7.3/10 Grade : B+