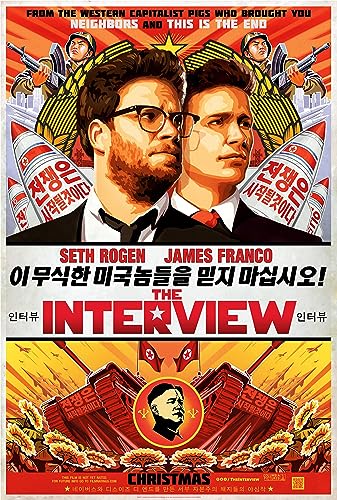 Movie: The Interview(2015)[tt2788710] In the action-comedy The Interview, Dave Skylark (James Franco) and his producer Aaron Rapoport (Seth Rogen) run the popular celebrity tabloid TV show "Skylark Tonight." When they discover that North Korean dictator Kim Jong-un is a fan of the show, they land an interview with him in an attempt to legitimize themselves as journalists. As Dave and Aaron prepare to travel to Pyongyang, their plans change when the CIA recruits them, perhaps the two least-qualified men imaginable, to assassinate Kim Jong-un. Written bySony Pictures Entertainment

Med-Jasta on 3 March 2020
Sure there are some moments that are too over the top or that go on for too long but all in all really funny. James Franco as the idiot is really good. Reminded me of South Park with their take on a dictator. How do you make fun of them? Turn them into everything they hate.Of course this movie isn't Wag the Dog or some smart political commentary or satire movie because it was never intended to be. It's a comedy from Seth Rogan. That miserable SOB Kim Jon Un just turned it into that. As he should be offended since his country doesn't have freedom of speech and I'm sure he's never been criticized in his entire life. I only wish that they made fun of how fat that pathetic little man is, because that's such an easy target and beyond the hair adds to his goofy unthreatening, ungodly appearance. Really a missed opportunity, the fact that he says that he doesn't pee or poop and that he is a God and that he is really fat is too funny. you wonder if because he doesn't have to go to the bathroom that it's still inside of him and that's why he's such a fat piece of crap.

Anchorman: The Legend of Ron B