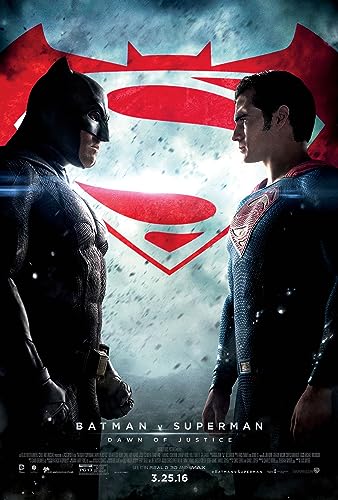 Movie: Batman v Superman: Dawn of Justice(2016)[tt2975590] The general public is concerned over having Superman on their planet and letting the "Dark Knight" - Batman - pursue the streets of Gotham. While this is happening, a power-phobic Batman tries to attack Superman. Meanwhile, Superman tries to settle on a decision, and Lex Luthor, the criminal mastermind and millionaire, tries to use his own advantages to fight the "Man of Steel". Written byMine Turtle

areebkhan619 on 19 March 2016
Sadly, a step down from Man of Steel. First of all, I was a bit skeptical about this movie, and thought the runtime (about 2 and a half hours) was way too long (and I wasn't completely wrong though). The action scenes were better than what we saw in the trailer. Although the doomsday scenes had terrible CGI (you'll know it when you'll see it), but overall I was happy. The movie had a lot crazy-packed action (it was directed by Zack Snyder, what do ya expect?) but the plot didn't know where it was going. A lot of scenes were a treat for me to see and I got goosebumps watching them. There was more to Jesse Eisenberg than what I saw (and hated, like most people) in the trailer. I made a bet to my friend that he'll suck in the movie, guess I'll have to pay up. He really WAS good. But just like any other movie, it's not perfect and has flaws. You can see that Zack tried hard very hard to fit everything nicely into the movie, but over stuffing was bound to happen. Other than that, I think there are some fan-boys who'll be satisfied no matter how bad the movie is. Hope my review didn't give away any spoilers in any way whatsoever, and that you end up enjoying the movie as much as (or more than) I did.