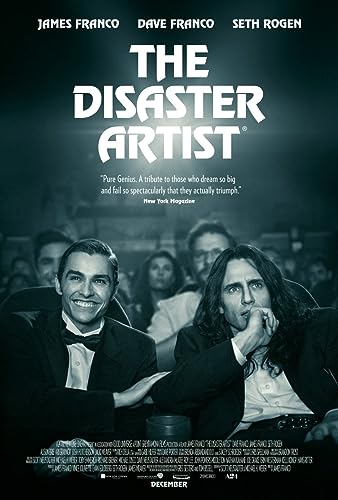 Movie: The Disaster Artist(2017)[tt3521126] Aspiring actor Greg Sestero befriends the eccentric Tommy Wiseau. The two travel to L.A, and when Hollywood rejects them, Tommy decides to write, direct, produce and star in their own movie. That movie is The Room, which has attained cult status as the "Citizen Kane" of bad movies. Written byrorybobglynn

Jeremy_Urquhart on 20 November 2017
So yeah, The Room is pretty well-known by now, becoming just about the most popular 'so bad it's good' film of all time over the last six or seven years, as has the story behind it- as detailed in Greg Sestero's book, The Disaster Artist.So being a fan of both, I had a good idea of what I was in for, approaching the James Franco directed The Disaster Artist, but I'm pleased to say the film ended up meeting my expectations and then some.First things first: James Franco's performance in this is incredible. His accent and mannerisms are a spot-on imitation of Wiseau's, and he manages to make you feel sympathy towards the character too. It's one thing to so directly portray such a unique individual and make doing so incredibly funny, but it's another thing entirely to make him feel (almost) like a real person, and to make you genuinely care for him. I'm not exaggerating when I say that I truly think this performance is worth an Academy Award nomination (fingers crossed).Everyone else was good too. Dave Franco had a less flashy role than his brother's, sure, playing Greg Sestero, but he did a good job as the more grounded, 'straight man' type character. And some of the casting was genius too- I could list almost everybody, but special mention should go to Josh Hutcherson, Zac Efron, and Jacki Weaver.Also worth mentioning is how well the cast and crew recreated the look of the original The Room- the mannerisms of the actors, the set design, the lighting, the camera-work- it's all perfect. It makes the film an impressive technical achievement in many regards; not simply a funny film with inspired casting and good performances.As for downsides? There aren't a whole bunch. Perhaps the most significant is that this may not have a great deal of appeal beyond those who've watched and loved The Room already. I'm sure it would still function as a good film, but it might lack something for those who aren't already indoctrinated into the cult of The Room. Other nitpicks I could think of may be that the film is fairly conventional in terms of plot- not a ton of surprises here (other than maybe a few cameos throughout). And it feels a tiny bit longer than just over 100 minutes- but again, that's a nitpick. I am more or less struggling to think of too much that I personally didn't like with this film.So as a long time fan of The Room, this is about as good as I hoped it could be. I hope I'm wrong in my views that the audience for this will be limited, and that it does have appeal beyond hardcore fans of The Room. And hey, if there's enough buzz behind it to allow for James Franco to earn an Oscar nomination, then that would be fantastic.And deserved (in my opinion).This is one of the most pleasant surprises of the film year so far, and second only to Tim Burton's Ed Wood in the (admittedly probably non-existent) sub-genre of films about making terrible movies.If you've ever watched The Room, or even just watched some of its scenes on Youtube, make sure you don't miss this one.