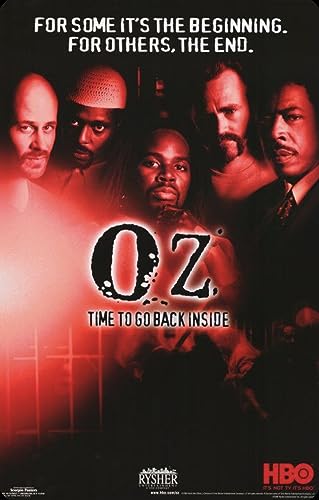 TV Series: Oz (TV Series –)(1998)[tt0118421] OZ chronicles the attempts of McManus (Terry Kinney) to keep control over the inmates of Em(erald) City as well as the drug trade and the violence. There have been many groups of inmates during the run of the show and not everybody makes it out alive. There's the gangstas (Adebisi, Wangler, Redding, Poet, Keene, Supreme Allah), Muslims (Said, Arif, Hamid Khan), Italians (Pancamo, Nappa, Schiebetta), bikers (Hoyt), Aryans (Schillinger, Robson, Mark Mack), Christians (Cloutier, Cudney), Latinos (Alvarez, Morales, Guerra, Hernandez), gays (Hanlon, Cramer) and a whole pile of others (the O'Riley brothers, Keller, Stanislovsky, etc.). And there's a great "everyman" character called Beecher who gives a good look at a normal man who made one tragic mistake. Besides the regular inmates, there's guest stars such as Method Man, Luke Perry, Master P, Treach, etc. and a bunch of prison staff doctors (Dr. Nathan), a nun/psychologist (Sister Peter Marie), a bunch of guards some honest, some crooked... Written byLorgSkyegon

Danny_G13 on 23 July 2002
This is such a powerful show, superbly acted, that frankly I feel it's the best TV drama ever made. I know plenty of Hill Street Blues/NYPD Blue/Prime Suspect (etc) fans would enthusiastically argue this point, but I feel Oz is so well acted, so well realised and so darn entertaining that it's no contest. The characters are very watchable, the stories are gripping, and so much happens in each episode that the viewer has a lot of food for thought once the show is over. I'm currently at the 4th season being in UK, so I don't know the latest developments, but I got a lot of story to look forward to...The fact it's also very satirical, particularly from Augustus Hill's commentary adds beautifully to the mix.Nothing short of outstanding.