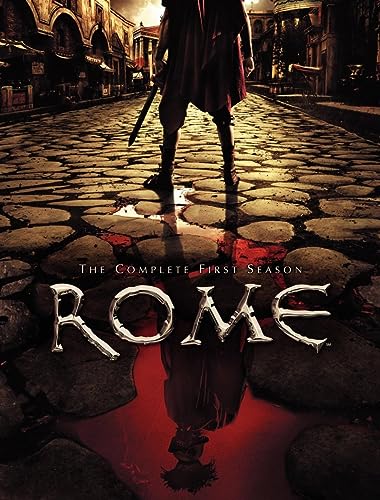 TV Series: Rome (TV Series –)(2005)[tt0384766] In this British historical drama, the turbulent transition from Roman republic to autocratic empire, which changed world history through civil war and wars of conquest, is sketched both from the aristocratic viewpoint of Julius Caesar, his family, his adopted successor Octavian Augustus, and their political allies and adversaries, and from the politically naive viewpoint of a few ordinary Romans, notably the soldiers Lucius Vorenus and Titus Pullo and their families. Written byKGF Vissers

Kerry Condon...
Octavia of the Juli...

Lindsay Duncan...
Servilia of the Jun...

CelluloidRehab on 31 October 2005
HBO does it again. I got my start with the network back in 1990 with a sitcom called Dream On. From there, I have followed the yellow brick road through Sex and the City, Sopranos, Six Feet Under, Band of Brothers, From the Earth to the Moon and Deadwood (not to mention hours and hours of boxing, documentary specials and tons of movies).HBO now presents a miniseries about the Roman Empire, appropriately called "Rome". The story revolves around the time Julius Ceasar conquers Gaul, and the subsequent years following that (Ceasar's rise to dictator). The series delves into historical and archaeological records, with a dash of artistic licensing to create an environment that seems so real. For the most part the series is divided into 3 parts :1) Julius Caesar's rise to unanimous political power.2) The exploits (in the field and at home) of a Roman officer, Luscious Vorenus, and one of the soldiers under his command (whom becomes his friend), Titus Pollo.3) The various political and social interactions and manipulations of Caesars relatives, namely Atia and her two offspring, Octavian and Octavia.4) Post Caesarian Rome. The production of this series is quite breathtaking. It seems like they took into account so many of the variables ; costumes, jewelry, architecture, religious practices, mannerism, military units, social venues, politics, class structure,etc. to bring the empire back to life in the 21st century. They went as far as to train the extras portraying the Roman soldiers in boot camp fashion. All were to sleep in tents outside and were provided with no modern amenities.This series has something for everyone with a strong stomach and inclination towards the graphic. The show is going for authenticity. This is not Rome seen through the eyes of 21st century people, but rather through they eyes of 1st century BC Romans. It has action, graphic violence, sex, incest, betrayal, murder, Machiavellian scheming, politics, family bonding, war,etc. I just can't begin to describe just how authentic the show feels and how hypnotically captivating it is to watch (especially in High Definition). I can't help but feel that John Milius (as a writer and executive producer) has brought some of the same grit and grime from Conan (albeit with a more historic flavor). Also on the writing credits is work from Entourage, Sex and the City, Band of Brothers and Desperate Housewives.The acting core is quite good, consisting mostly on an English cast with theatrical experience. Their performances are quite good and contains many veterans and some newcomers (at least to me). Such standouts would include : Indira Varma (of Kama Sutra fame) who plays Luscious' wife Niobe, Kerry Condon (whom I first saw in Jet Li's Danny the Dog) as Atti's daughter Octavia, Kenneth Cranham (Jimmy from Layer Cake) as Pompey, Kevin McKidd (from Trainspotting and Dog Soldiers) as Luscious, Polly Walker as Atia and Ray Stevenson as Titus.To add to the authenticity, the series was shot at Cinecitta Studios in Rome. This gives the series an extra flavor. I highly recommend this series, but only for those that can stomach graphic sex, violence and a lot of the Queen's English. It is currently my favorite show, and wishing it could last 1000 years.-Celluloid Rehab