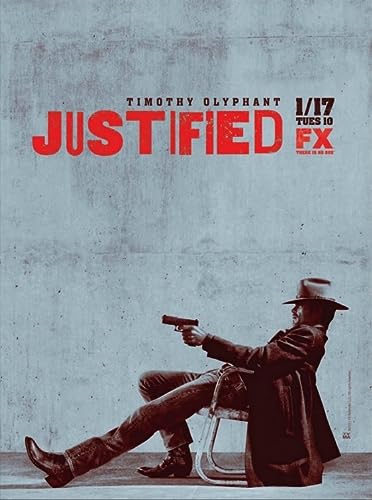 TV Series: Justified (TV Series –)(2010)[tt1489428] U.S. Marshal Raylan Givens is a modern day nineteenth century-style lawman, enforcing his brand of justice in a way that puts a target on his back with criminals, and places him at odds with his bosses in the Marshal service. That conflict results in a reassignment for Givens to the U.S. District covering the town where he grew up. He is an anachronism, a tough, soft-spoken gentleman who finds his quarry fascinating, but never gives an inch. Dig under his placid skin and you'll find an angry man who grew up hard in rural Kentucky, with an outlaw father, who knows a lot more about who he doesn't want to be than who he really is. Written byFX Publicity

jporto on 23 March 2010
I rarely watch TV, but being such an Elmore Leonard fan I had to see if Justified lived up to Leonard's books. This series appears to be based upon Riding the Rap. Episode 2 actually uses dialog that is taken straight from the book, so I assume Leonard is consulting on this project. The series, at least the first two episodes, captures the wacky but gritty Elmore Leonard style that I love. I disagree about the slowness of pace. I think the series is paced correctly for maximum benefit. Given the cramped style of a 40 or so minute format, I am surprised that they are able to pack in as much as they do. My guess is that the series will be one long exposition of the book, which is fine with me since I am always sorry when I come to the end of an Elmore Leonard novel. If the script and the visual effects didn't capture my mental image of Leonard's novels, then I would not watch.. But the writers, directors and in particular the actors...all of them...have nailed Elmore Leonard. This is far better than Get Shorty. It has the grittiness and the fidelity missing in that movie. I would not be surprised if this series won an Emmy.