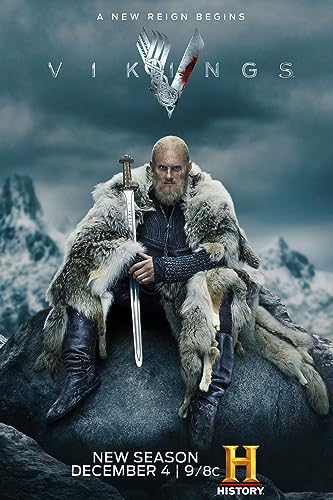 TV Series: Vikings(2013)[tt2306299] The adventures of a Ragnar Lothbrok: the greatest hero of his age. The series tells the saga of Ragnar's band of Viking brothers and his family as he rises to become King of the Viking tribes. As well as being a fearless warrior, Ragnar embodies the Norse traditions of devotion to the gods: legend has it that he was a direct descendant of Odin, the god of war and warriors. Written byHistory Channel

vandelour on 12 January 2019
Be thankful for what we got.. seasons 1 through 3. Fascinating program. The story of Ragnar, the acting of Travis Fimmel and the extraordinary detail made the first three seasons compelling. Tostig. My god, the guy had what less than twenty lines and stole the show. And then the bottom fell out of the show. Supporting characters were tasked with carrying the show and they weren't up to it. What was an epic story morphed into an epic cluster____ of pointless events, battles and internal squabbling to the point where I don't care who wins or loses anymore. And I"m sick of Lagertha and Boneless. Oddly enough, a secondary character, King Harald, had potential. Too bad he's sidelined as semi-comedic material. Excellent actor.But give the show credit -- remember how great the first three seasons were.