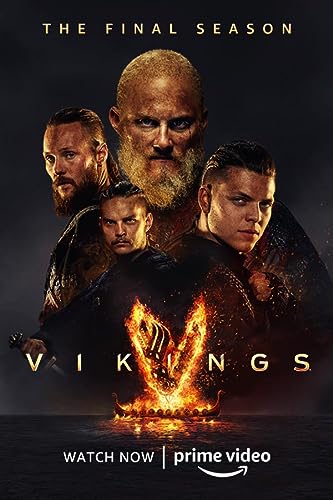 TV Series: Vikings (TV Series –)(2013)[tt2306299] The adventures of a Ragnar Lothbrok: the greatest hero of his age. The series tells the saga of Ragnar's band of Viking brothers and his family as he rises to become King of the Viking tribes. As well as being a fearless warrior, Ragnar embodies the Norse traditions of devotion to the gods: legend has it that he was a direct descendant of Odin, the god of war and warriors. Written byHistory Channel

southdavid on 8 January 2021
With the release of the last half of the 6th season we finished the epic seven-year saga of Ragnar Lothbrok and his sons. Whilst I am not sure I'd consider "Vikings" to be amongst the very top tier of shows I've watched in my lifetime; I've certainly enjoyed my time with the Norsemen.Ragnar Lothbrok (Travis Fimmel) is a farmer and raider who becomes a legendary figure amongst the Viking people by establishing consistent navigation techniques and leading successful raids on the various Kingdom's that would become Britain. Rising to become King, his legacy is cemented by the actions of his sons, particularly Bjorn Ironside (Alexander Ludwig) and Ivar The Boneless (Alex Hogh Andersen) who would rule countries and influence politics far from their homelands.The first few episodes don't really convey the scale of the ones that would eventually follow. There are lots of great characters that appear across the run but at the start the show rests on Travis Fimmel's shoulders and he's really good. Ragnar is not a good man, or father and the danger of the character always is present in Fimmel's wild eyes but you still understand why his men fought for him and elevated him so highly that his sons could trade of his name. His sons each derive some aspect of him, Ubbe played by Jordan Patrick Smith is the explorer he wanted to be, Bjorn the noble King, Hvitserk, played by Marco Ilso, is the sufferer and addict and Ivar the vicious warlord. I don't really think any of the characters across the run were poorly performed and it's interesting to look back now and remember some of those characters and the stories that only played for a while.The scale of the show gets bigger and bigger and the battle scenes more and more expansive. I don't feel as strongly as others that the show drops off as it refocuses on the sons of Ragnar but I would accept that some of the stories don't quite end at their natural point or have deviations that don't go anywhere.It's not, for me, in that top tier "West Wing", "Game of Thrones", "The Wire" category, but it's not far below and I'm happy to have visited Kattegat for these last few years.