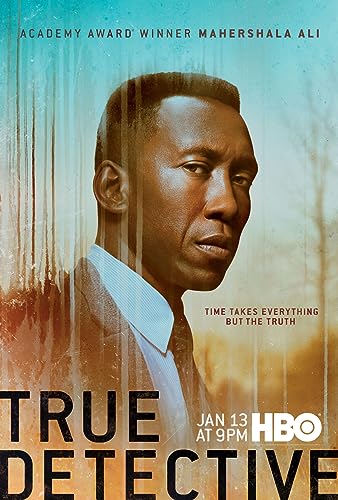 TV Series: True Detective(2014)[tt2356777] In 2012, Louisiana State Police Detectives Rust Cohle and Martin Hart are brought in to revisit a homicide case they worked in 1995. As the inquiry unfolds in present day through separate interrogations, the two former detectives narrate the story of their investigation, reopening unhealed wounds, and drawing into question their supposed solving of a bizarre ritualistic murder in 1995. The timelines braid and converge in 2012 as each man is pulled back into a world they believed they'd left behind. In learning about each other and their killer, it becomes clear that darkness lives on both sides of the law. Written byRich28

gogoschka-1 on 13 January 2014
Right when the opening credits start and you hear that morbidly beautiful song 'Far From Any Road' by 'The Handsome Family', you know that this isn't going to be your usual cop show. Now, if you're more into action films, avoid this at all costs - but if you like amazing performances and dark, brooding cinema peppered with some black humour and a slight psychedelic touch, you're going to love this. The atmosphere and the southern ambiance of this show are so rich and the cinematography is so beautiful, I can hardly think of anything in recent TV-history that compares to this. To make a musical analogy: if the crazy, creative energy of 'Breaking Bad' felt like 'Led Zeppelin', this feels more like 'The Doors'. The slow, bluesy, hypnotic pulse of this show draws you in and hooks you - and then it doesn't let go. By the way, the original music is also excellent (T-Bone Burnett) and fits the mood perfectly. As far as the actors are concerned, there's nothing but great performances. Even the smaller parts are perfectly cast and the two leads: wow, just - wow! Harrelson (freshly returned from 'The Hunger Games'), plays the "normal", more down to earth character, while McConaughey (still marked by his own personal hunger games) nails the part of his slightly mad, highly intelligent but nihilistic and severely depressed partner. Watching them play off each other (again, after 'Edtv' and 'Surfer, Dude') while their conflicted - and conflicting - characters try to solve a ritual murder is so captivating (and so much fun) I honestly don't care that much if they are ever going to solve that crime.So for the moment, I'm giving this 10 stars (I can still take back a few if it all goes downhill from here), because in my opinion, there wasn't a single note out of key so far. The writing is top notch, and if the creative team behind this can keep it up, this could turn out to be HBO's next 'Wire' in terms of quality. Cary Fukunaga ('Sin Nombre','Jane Eyre'), who will hopefully one day adapt Stephen King's 'It', proves once more that he's a very accomplished director and a talent to look out for in the future. My verdict: if you like a well told, character driven story (that might lead you to some very dark places) and if you're not put off by a rather considerate pace, I can't recommend this show enough - this is some great television.Favorite films: IMDb.com/list/mkjOKvqlSBs/Lesser-Known Masterpieces: imdb.com/list/ls070242495/Favorite Low-Budget and B-Movies: imdb.com/list/ls054808375/Favorite TV-Shows reviewed: imdb.com/list/ls075552387/