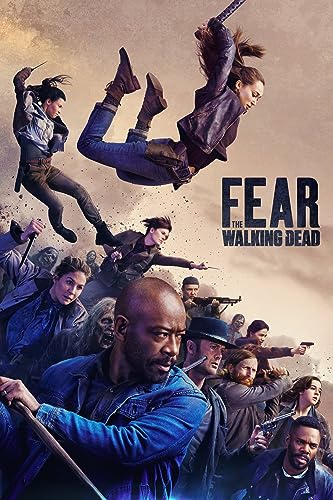 TV Series: Fear the Walking Dead(2015)[tt3743822] Spin off series of The Walking Dead that portrays the beginning events of the zombie apocalypse in the West coast during the same time frame when the city of Atlanta was falling under attack, while Rick was in a coma at the local hospital. It shows how the strain was already in full effect in the south while it's just starting in California.

serbian_007 on 23 August 2015
Was the opening episode perfect? No. Were there things missing from the plot that I hoped would be included in the episode? Yes, Yes, Yes, but maybe these things will come in episode 2? We'll see. Was it enjoyable overall? Yes. I like the original Walking Dead with Rick waking up in the hospital much better as a series opener. However, if we are honest looking back, season 1 of the Walking Dead wasn't all that great either; only the first episode was really mind blowing and memorable, so let's try to be fair with this prequel and not come to any hasty conclusions.In my opinion there was FEAR in this opening episode and I still feel hopeful for a great season. My heart was pounding in my chest, and I was taking slow shall breaths in the early scenes. After the midway point, though, my excitement level kind of waned and the story felt a little off point. I began to nitpick the acting, the setting, the characters, and the lack of depth in the story a little bit near the end, not to mention that none of the characters except one (Nick) were at all interesting to me. Nick reminds me a lot of Daryl; that's probably why he's my favourite character so far. The family is highly dysfunctional, yes, but kind of boring too, if we are honest - except Nick. I don't know, I guess a typical 'boring' family is kind of the whole point of the series so we'll see where this goes.This was a character driven episode, which some people might hate. Fear the Walking Dead has promise and I think a few more episodes will either make it or break it for the fans. Let's stay tuned until then and revisit my rating after watching a few more episodes. Who knows, maybe we'll find out that Daryl is somehow Nick's biological father and then we'll get a crossover episode with sonny coming home to daddy. Now that would be interesting - sarcasm intended. (Seriously though, I do like Nick, and Daryl).

Fear the Walking Dead: The Alt