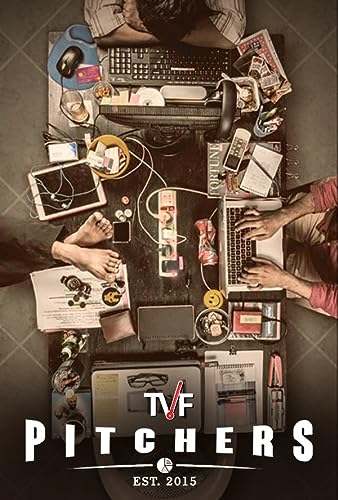 TV Series: TVF Pitchers (TV Mini-Series )(2015)[tt4742876] Four friends Naveen Bansal (Naveen), Jitendra Maheshwari (Jitu), Yogendra Kumar (Yogi) and Saurabh Mandal (Mandal), decide to enter the start-up world by launching their own start-up. Things are kicked off by Naveen who, angry at not being given his due at work, resigns in a drunk state. At the same time, he receives news of his B-Plan reaching the final round of the NASSCOM start-up conclave. This begins a series of situations in which the four friends rediscover what they really want in life and the challenges they face in getting their start-up idea off the ground.It's story is inspired from HBO TV series "Silicon Valley" but the plot is well designed in accordance with Indian audience who are not well aware of the Idea of Startup. Written byahmetkozan

bisalsinghnayal on 6 August 2015
I have been a follower of TVF since their "Permanent roommates" series. You guys are nailing it down one by one...!!!. The best thing, majority of the Indian population is able to relate themselves to your series :). Many guys do wanna take the leap of faith with startups but they are afraid. Hope your series inspires us so that this fear of failure can be crushed.Acting: 10/10 Casting: 10/10 Editing: 10/10 Background score: 10/10 Dialogues: 7/10 (You could have kept it little less abusive :(, I wanted to show this series to older generations in my family who still think jobs in MNC and govt. jobs is what the Indian dream is. They are still not aware of the startup culture)Do share the background music/songs please. Please keep this series alive for a long time like the 2-3 seasons.